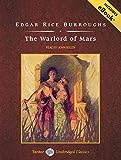 1) The Warlord of Mars

Author
Burroughs, Edgar Rice
Series
Barsoom series volume 3
John Carter of Mars
Tantor unabridged classics
Sastrugi Press Classics
Publisher
Project Gutenberg
Language
English
eBook
Show Edition
Available Online
Check Out on OverDrive / LibbyPreview From the book
Published
Project Gutenberg
Source
OverDrive/Libby
Available Online
More InfoCheck Out on OverDrive / LibbyPreview From the book
Description
Read Description
When John Carter discovers that his beloved wife, Dejah, has been imprisoned in the Temple of the Sun, he is desperate to rescue her. However, the prison, which slowly rotates, is only opened once a Barsoomian year. As Dejah's prison sentence drags on for over a hundred days, the window of opportunity is narrowing for Carter to save her. Amid social and political unrest from the last war, the Thern had appointed a new leader, but many still believed...
More Info
SHARE

Can't find what you are looking for? Try our Materials Request Service. Submit Request