1) A greyhound, a groundhog 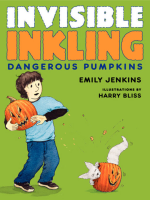 It's Halloween in Emily Jenkins's Dangerous Pumpkins, the second title in the chapter-book series about a Brooklyn fourth grader and his invisible furry pal.

Hank Wolowitz hates Halloween. Every year his older sister, Nadia, scares him half to death. But Hank's invisible bandapat, Inkling, loves Halloween. Pumpkins are his favorite food. Hank has serious trouble stopping Inkling from devouring every jack-o'-lantern in their neighborhood,